# Install from the Control Panel

# Installing from the Terminal

Express Forms can also be installed manually through Composer:

Follow the steps below to quickly get Solspace Express Forms setup in minutes.

Updating is easy. Express Forms uses the Craft Updates Service, which means that every time there's an update available, it'll show up in the Updates area (Utilities -> Updates) of the Craft control panel. You can then review the changelog there, or view it here.

# Updating from the Control Panel

# Updating from the Terminal (recommended) 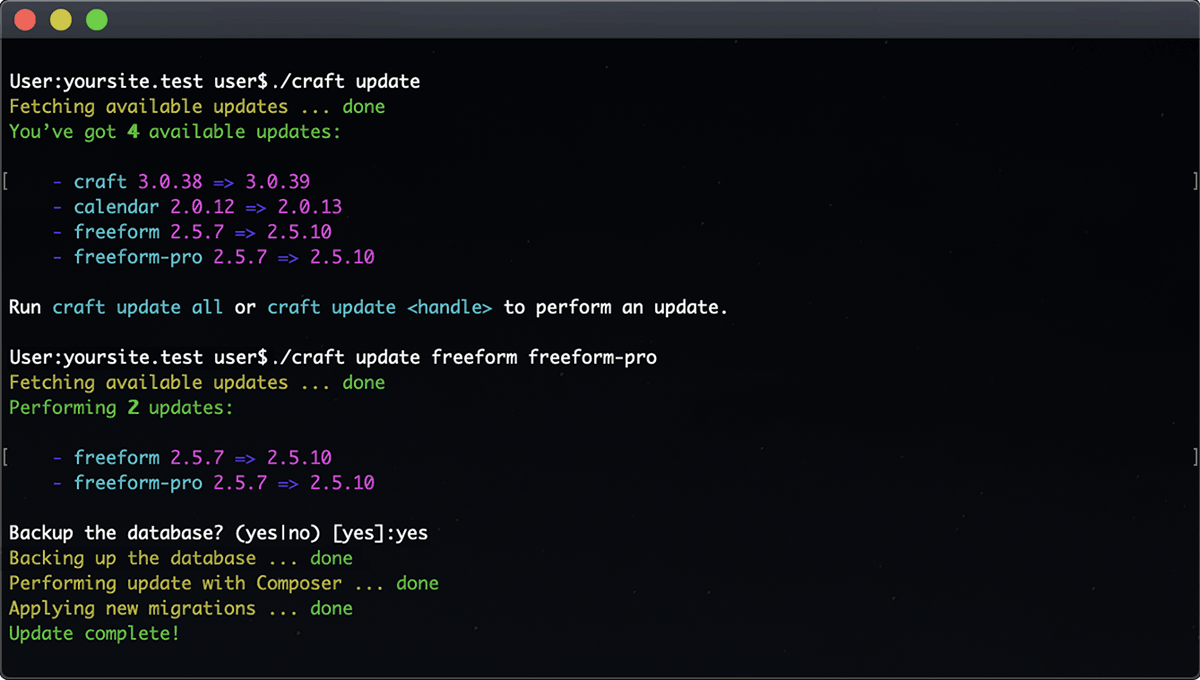 # Updating with Composer from the Terminal

You can also update Express Forms more manually if you like, using Composer (composer update). This may also be helpful in certain scenarios where you need to workaround an issue while updating.

The great thing about Craft 3 is that it allows you to trial third party plugins to see if they're right for your needs. We recommend trying any commercial plugin first before buying it. You trial any plugin or Craft CMS itself by running your site from any domain that Craft does not consider to be a public domain. Common examples of domains that would work include:

Go to Plugin Store area of your Craft 3 control panel and browse for any plugins you may need. Take note of how many installs each plugin has and when they were last updated to give you insight into how popular and maintained they are. When you've found the plugin you like, you can either click the Try button in the Plugin Store, or follow the Installing Instructions above.

Users then have the option of purchasing a valid license for plugins either directly through the Craft 3 Control Panel, or via the Craft Plugin Store website.

If this is your first time purchasing a third party plugin, here's an overview of the purchasing process of plugins:

Third party plugin licenses are managed and validated entirely by Craft. Some issues may require that you contact the Craft Team directly if issues persist. The following troubleshooting tips account for most common issues we've seen our customers report to us:

# 'This license is tied to another Craft install' (Example C)

If you receive the error This license is tied to another Craft install. Visit id.craftcms.com to resolve., it is indicating that the license is tied to another install of Craft CMS. This is likely because either you purchased this under a different domain or subdomain, or something glitched in the process of purchasing the license. Regardless of what happened here, this can likely be resolved by:

If you are moving an existing site to a new non-public domain from a different local host name, you will need to clear your data caches from the Clear Caches tool on the Settings page before Craft will realize that the host name has changed.

# 'Your license key is invalid' (Example A)

If you receive the error Your license key is invalid., it is indicating that the license you've entered is not valid. It could be that you copy/pasted the license key wrong (perhaps there's an extra space at the beginning of the key you copied).

If you receive the error This licence isn’t allowed to run version X.X.X., it is indicating that you're using a version of the plugin that your license isn't eligable for, which in almost all cases would be a plugin license that expired / finished the 1 year term since the initial purchase. According to Craft's policy (out of Solspace's control), once the plugin license has expired, the current version you have installed is the maximum version you can have. The rationale behind this (according to Craft) is that if, for example, you were using Express Forms 1.0.7 at the time of expiry, but 1.2.4 was available to you just before the license expiry date, if that 1.2.4 version was available to you indefinitely, one might update to that version months or years later and experience issues while upgrading, which could generate issues and support requests to the developer beyond that initial 1 year term. This is a fair statement and concern on Craft's part, in our opinion. Craft does send out 30 day notices reminding customers of plugin licenses nearing expiry, so it would be wise to consider squeezing in your final update(s) earlier in that 30 day window if you do not wish to renew your license for future updates beyond the initial 1 year term.

When a license expires, you can keep using the version that’s currently installed, however you won’t be able to update it to newer versions until you’ve renewed the license.

As for how this happened in the first place, Craft's CP updater and their recommended built-in update command feature will make sure that you never update to a plugin version you don't have access to. However, if you used Composer to update, it bypasses all of Craft's license validation and you can get yourself into the situation where you now have a version that your license shouldn't have access to, which then generates the error inside the Craft CP. The only way to resolve this would be reverting back to the previous version (which is not always recommended, as it's possible plugin update migration(s) could have taken place, and reverting could break your install), or renew your license. Please feel free to reach out to us for further clarification and assistance if you're in a bind with this, and we'll do the best we can to help.

If you have a plugin that shows as Missing, this is because you don't have the plugin installed and/or the plugin files are not in the Craft vendor folder, BUT you have a valid purchased Craft 3 license for the plugin tied to that Craft install. Depending on your scenario, you likely either have the issue of wanting the plugin to be available, or not wanting it to show up there.

If you purchased the plugin and are expecting it to show up for install, what likely happened is that Craft or your server environment glitched and didn't correctly add the plugin dependency (files) to your Craft site's vendor folder (but knows that you have a valid purchase of it). If this is the case, you'll need to follow the Installation Instructions documentation above to install the plugin.

If the above is not the case for you, and you don't want this license showing up in your Craft site, this can likely be resolved by: